A quintessential portal into Ram Dass’ life and teachings 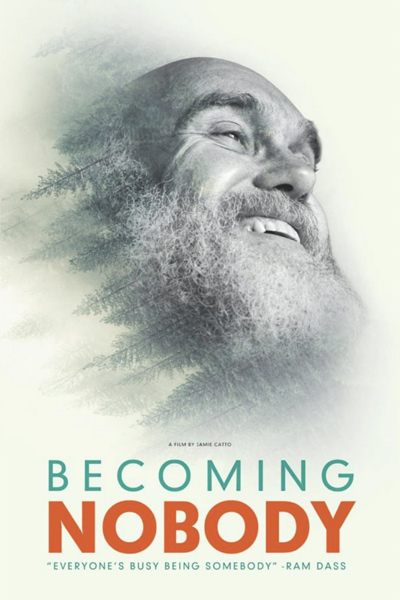 In 1988, aspiring London filmmaker and musician, Jamie Catto, then 20 years old, heard a cassette of Ram Dass after attending a yoga class. In 1994, he met Ram Dass at a UK retreat while his girlfriend was pregnant with the first of his three daughters. Jamie was never the same person after that.

Catto interviewed Ram Dass for the first time in 2001 in a wonderful moment in the film One Giant Leap (2002), which was subsequently released through Palm Pictures. This interview was followed by another for the second Giant Leap installment, What About Me? (2005).

In the course of his many visits with Ram Dass in Hawaii, Jamie met Raghu Markus, Producer of Becoming Nobody and Executive Director of Love Serve Remember Foundation. Jamie shared his desire to make “THE Ram Dass film” with Raghu. With a background in the music industry, Raghu understood the historic value of creating a seminal film of Ram Dass’ life of observations and shared experience. The goal of reaching out beyond a core group already familiar with Ram Dass would require a more comprehensive feature length film, one with a broader perspective and appeal that would synthesize and coalesce his life of work and wisdom.

Wit and humor in the context of a casual conversation seemed a good way to deliver heady information in a simple, entertaining, and illuminating fashion. Blessed with a delightful and articulate on-screen personality, Ram Dass would be up to the task. Even with the after-effects of a severe stroke, Ram Dass delivers an engaging narrative, touching the joy, the foibles, and the honesty for the very essence of his work and relevance.

Using his own life as an example through the director’s interview, accompanied by archival footage and original music, Ram Dass explores our universal human condition and behaviors in connection to the journey of the soul and the shared unity of all of our lives. The initial core interview was filmed in March of 2015 at Ram Dass’ home on the island of Maui, Hawaii.