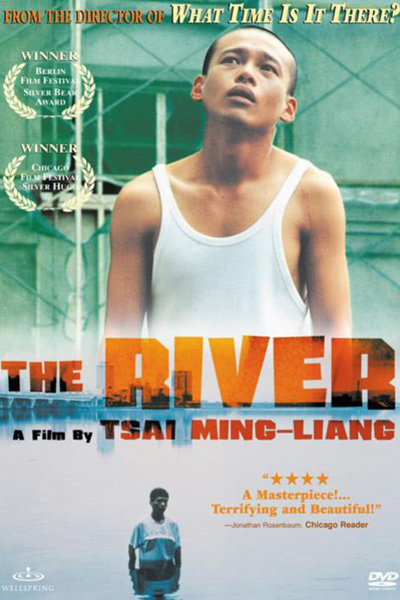 Whether or not ''The River'' is, as some critics have claimed, Mr. Tsai's masterpiece, it is an excellent introduction to his oblique narrative style, his favored themes and his careful, lyrical visual sensibility. The story emerges slowly, with virtually no exposition and minimal dialogue -- for long stretches ''The River'' resembles a silent film with ambient street noise instead of piano music -- through a series of long shots that are at once naturalistic and meticulously composed. You feel that Mr. Tsai is not staging the action so much as observing it, allowing small gestures and funny-sad coincidences to resonate like the words in a poem.

The emotions that circulate through the film are as familiar as they are difficult to name. Mr. Tsai presents a tableau of three lonely people who turn out, as if unbeknownst to themselves, to be related -- a mother (Lu Hsiao-ling), a father (Miao Tien), and their son Xiao-kang (Lee Kang-sheng).

The father, when he is not trying to cope with the water that mysteriously floods into his room from the apartment upstairs, seeks out anonymous sex with young men in the city's gay bathhouses. The mother pursues a desultory affair with a pornographer. Their aimless son, after a brief, accidental film career (he plays a drowned corpse floating face down in the river), develops a crippling pain in his neck, which has no apparent cause, and no cure.