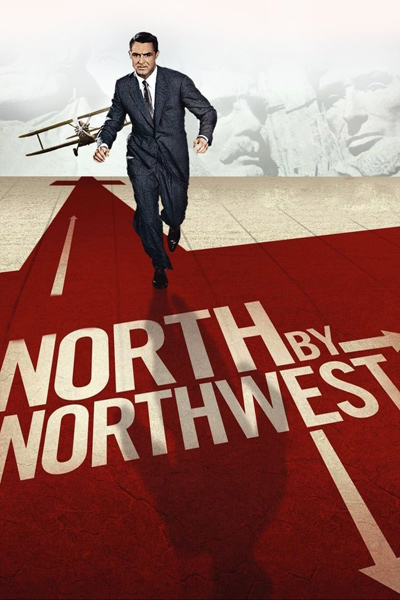 "I want to do a Hitchcock picture to end all Hitchcock pictures" is the comment screenwriter Ernest Lehman made to Alfred Hitchcock one day in 1957. With North by Northwest (1959) the ultimate Hitchcock picture is exactly what they produced. All of Hitchcock's trademark themes are here in the story of an everyday man (Cary Grant) caught up in a swirl of mysterious events (spies chasing microfilm) while being helped by a beautiful blonde (Eva Marie Saint). There's a gripping, imaginative chase scene and the entire film wraps up at an unexpected public landmark (Mount Rushmore).

North by Northwest came into existence when Hitchcock and writer Ernest Lehman hit a brick wall while working on the nautical thriller, The Wreck of the Mary Deare (1959). They messed around for a few weeks while telling the studio the project was going great until one day Lehman thought of creating a pure Hitchcock film. The director could never resist a challenge and immediately clicked with the idea, especially since he'd longed to use Mount Rushmore as a location but never had an appropriate project. So while Hitchcock was filming Vertigo (1958) the two would get together and thrash out the script and further plans for a film that was then called In a Northwesterly Direction. (Oddly enough it was also briefly titled Breathless which a year later would be the English title of the debut feature from Jean-Luc Godard, a rabid Hitchcock fan.) The resulting screenplay was tight, balanced and intricate; Hitchcock later told Francois Truffaut that "In this picture nothing was left to chance." The script also made liberal use of the MacGuffin, Hitchcock's name for a device that keeps the story in motion even though in itself it's practically meaningless. The key MacGuffin in North by Northwest is the secret information sought by James Mason's sinister operation even though we never learn why it matters. This was Hitchcock's personal favorite, one he said had "been boiled down to its purest expression: nothing at all!" By the way, Hitchcock and Lehman never did make The Wreck of the Mary Deare. Michael Anderson ended up directing that one with Gary Cooper and Charlton Heston.