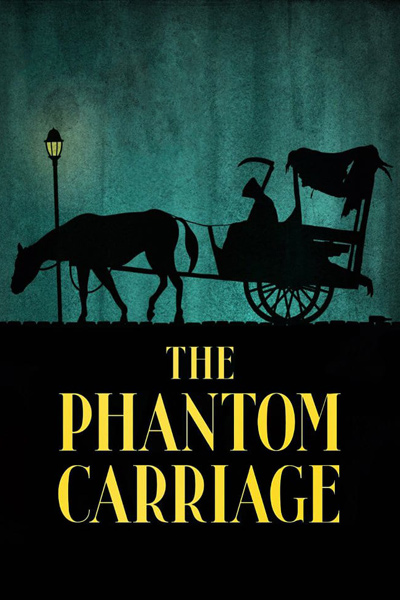 Victor Sjöström gained his greatest international fame as the star of Wild Strawberries, the 1957 classic by Swedish auteur Ingmar Bergman, where Sjöström played Dr. Isak Borg, an aging medical professor looking back on his professionally rich but personally loveless life. As a renowned actor almost eighty years old, Sjöström was perfect for the part. But another reason for Bergman's casting choice was his lifelong attachment to Sjöström's most highly acclaimed film: The Phantom Carriage, produced in 1921 and still regarded as Sjöström's most dazzling achievement. "My relationship with [it] is very special," Bergman said of the movie he watched every year for decades. "I was fifteen years old when I saw it for the first time" and it became "one of the major emotional and artistic experiences of my life." It certainly influenced some of Bergman's films, especially his 1957 masterpiece The Seventh Seal, in which Death carries off the living much as he does in Sjöström's earlier meditation on this mournful, universal subject.

The Phantom Carriage, originally titled Körkarlen or "Driver," begins on New Year's Eve, but little is festive about what's going on. A young charity worker lies dying of tuberculosis, and her last wish is that a man named David Holm be brought to her bedside. David is nowhere to be found, and when we see his wife at their poverty-stricken home, which is more like a barn than a comfortable dwelling, we understand that whoever Holm turns out to be, he's certainly no responsible family man. Sure enough, he's one of the local drunks, welcoming the new year with a couple of drinking buddies in the local cemetery. Joining their celebration, we hear David relate a frightening story to his friends. Day in and day out, he tells them, Death's messenger rides about on a carriage to gather up souls whose time has come. The horse and carriage are always the same, but at the start of every year a new coachman is destined to replace the old one – and the dead soul who must take over the task is the very last person to die on New Year's Eve, expiring just as the clock strikes midnight. This is why he's always gloomy at the end of the year, David concludes, and it explains why he's terrified of dying on that fateful holiday.

No sooner has David finished his story than a fight breaks out between his friends, and in the brawl David is killed by a deadly blow to his head. Sure enough, Death's coachman comes calling just as David feared, hoisting his soul from his body and tossing it into his carriage. Riding alongside the supernatural messenger whose job will soon be his, David sees that it's his old friend Georges, the very man who lured David into a wild and rowdy life before his own death a year ago. Much of the film now unfolds in flashbacks, as David remembers how his reprehensible behavior destroyed his own promise and brought misery to people he once loved, including a brother who became a drunken murderer and a wife who had to run away from him for safety. The climax arrives when Georges brings David to witness the impending death of his innocent family, while in another place disease saps the strength of the young charity worker who never lost hope that someday David might redeem himself. The overall shape of the story is similar to that of Charles Dickens's classic A Christmas Carol, with David Holm as the Ebenezer Scrooge who must revisit sorry episodes of his life to learn where he went wrong and how to correct his course.