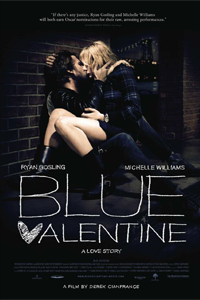 Americans, puritan or libertine, conservative or liberal, tend to look at the world in moral terms. When we hear a news story or are confronted with an issue, and especially when we make a movie, our reflex is not to think, "Here is something interesting," but rather, "This is right and this is wrong, and here's why."

This tendency is so ingrained in us that we don't even notice it: You're sitting on your front porch and someone jogs by. You don't think, "There's a person jogging," but rather, "That's what I should do." Or "Look at her showing off." This American predilection, which is neither good nor bad, has resulted in movies that are grand social documents ("Schindler's List," "No Country for Old Men") and also in lots of dumb action movies. But it's certainly a rare thing when an American film escapes the moral-lesson pattern ... which leads us to the extraordinary and beautiful "Blue Valentine."

One of the saddest and best films of the past year, it tells the story of a collapsing marriage, interspersing it with episodes from the couple's courtship. Making movies about marriage is difficult - the alchemy of marriage is so elusive that even the mechanics of our friends' marriages are mysterious. Thus, the reflex to approach a marital story in easy moral terms is especially pronounced. But when you leave "Blue Valentine," you don't walk out thinking Ryan Gosling was right or that Michelle Williams was right. Rather you think about life and what happens to people.

What do we expect of a spouse? "Blue Valentine" makes us ask that question. When we meet Dean (Ryan Gosling), he is a man about 30, with a receding hairline and a clueless mustache. He is in his housepainter clothes and smokes constantly, but when we see him interact with his adorable daughter, we know that he has a lot of warmth and kindness.

This impression is confirmed when we meet him years earlier, working for a moving company. He is spontaneous, full of fun and wit, but he also has a rare empathy in someone young: When he moves an old man into a nursing home, he takes pains to arrange the room in a personal way. Spontaneously, without any fuss or sense of his own virtue, he sees this sick old man as a human being, with a life and a history.

Meanwhile, Cindy (Michelle Williams), as she approaches 30, has the more demanding job, as a registered nurse specializing in women's health. When Cindy looks at Dean, she sees a man who is not growing, just growing older. When he takes her out, his hands aren't washed, and the destination is a seedy hotel. He wants nothing but what he has, to be a husband and father. He has no struggle with the world, no visions of conquest and no ego pushing him forward. And because of these traits, which some might see as virtues, he is boring to live with and an embarrassment to his wife.

Perhaps it's just not manly to want nothing - and not sexy to have one's identity so completely defined by one's relationships, even with family. Derek Cianfrance directed and co-wrote the film in a way that allows for a variety of interpretations. In any case, we see both sides and feel equally for both characters. The sex scene, which almost earned the film an NC-17 rating, is both necessary and agonizing - pained rejection on one side, visceral revulsion on the other.

If the film has a flaw, it's that it flashes back once too often, upsetting the rhythm at the finish and making it feel a trifle too long. But in a film of this depth and sensitivity, that's a minor concern. The acting is exemplary. Gosling brings a preternatural understanding of people to his performance, and Williams is amazing in the way she keeps trying to deny emotion and conceal emotion, even as she's showing us. There's a moment in which they dance together, and it's clear, even as she's pretending otherwise, that she has to get over her disgust just to go through the motions.

Incidentally, both actors went the extra mile and gained 15 pounds for the contemporary scenes. This was not enough to make them fat, but enough to make them lose their youthful glow, which was important. The loss of that glow is so much of what "Blue Valentine" is about.