New French thriller in the vein of Hitchcock and The Vanishing 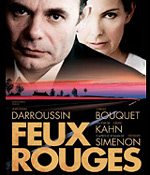 Red Lights is one of the best thrillers I have seen this year: tight, taut, and unpredictable. A great screenplay and top-notch direction are only half the story. The other half is the riveting portrayal given by the grumpy-looking lead actor, Jean-Pierre Darroussin.

It's summertime, and Antoine (Darroussin) and his wife, Helene (Carole Bouquet), are on the road, traveling through the South of France to pick up their two children from camp. Antoine is annoyed that Helene was late meeting him after work, and the heavy traffic tries his patience. By the time they stop for a brief rest at a bar, they are sniping at each other.

After leaving the car, Antoine returns to it, but Helene is not there. In her place is a note informing him that she has decided to take the train. Panicked, Antoine rushes to the nearest station, but misses her by seconds. So he drives to the next station, but is too late. Despondent, he visits another bar. It's there that he encounters the uncommunicative stranger (Vincent Deniard) to whom he later gives a lift. Maybe he didn't hear about the escaped convict who is the subject of a region-wide manhunt. And why does the stranger never remove his hand from his pocket?

For a film that starts out slowly, Red Lights spends the better part of its final hour generating more tension than a high wire act without a net. Even seemingly static scenes are suspenseful.

As a result of the discordant rhythm that Kahn gives to the film, it's impossible to predict what will happen next, or where everything will end up. When the whole story has been told, viewers will recognize a kind of karmic symmetry to events, but the chief pleasure is in getting to that point.

Darroussin has the kind of face that was made for this sort of role. It's a rough, weary visage with the mouth set in a perpetual frown. Antoine is not particularly likeable. It's no wonder Helene leaves him. But, despite all of Antoine's negative characteristics, we end up identifying with him. He is craven, slovenly, and pugnacious - personality traits that are normally absent from motion picture protagonists yet present, to one degree or another, in all of us.

Movie fans will recognize elements of Hitchcock and Clouzot in Kahn's approach. There are also similarities to George Sluzier's 1988 The Vanishing, although only to a point. Red Lights is in many ways more original and arresting. (J. Berardinelli)