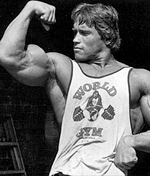 This 1977 documentary legitimized both bodybuilding and Arnold Schwarzenegger. It's an extremely well-made film, delving into the lives of the competitors with wit and insight, and the filmmakers keep it extremely entertaining by letting the colorful personalities of each person come out sharply. At the centre of course is 28-year-old Arnold (6-foot-2, 240 pounds, 23-inch arms!), the five-time Mr Olympia preparing to defend his title for the last time at the 1975 competition in Pretoria, South Africa. We follow the road to this championship as he trains in Venice Beach, along with other competitors including the 24-year-old newcomer Lou Ferrigno (6-foot-5, 275 pounds).

The camaraderie and good-natured competition between the bodybuilders is great fun to watch as they continually psych each other out. And Arnold himself comes off amazingly well--full of charisma and confidence with a mischievously cruel streak, a professional focus and intelligence, and an obsession with scantily-clad women.