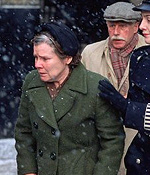 Vera Drake (Oscar-hopeful Imelda Staunton) is a steadfast, decent woman. She’s a perfect lower-middle class British mother: a sunny optimist and pragmatic enough to sew all her own clothes. In her spare time, she looks after neighbors who have no one to take care of them. If there is an archetype of a kind, British matron, Vera is it.

But she has another side that she keeps from her family. She also “helps young girls” who find themselves in a family way. She doesn’t use coat hangers, but a relatively sterile douche of soap, water, and some sort of mineral oil or disinfectant.

In spite of America's political reaction, Vera Drake is too complex to be summed up on a bumper sticker. The movie shows a picture of an abortion provider, and you can react however you will. Filmmaker Mike Leigh (Secrets and Lies, All or Nothing), creates another soul-deep portrait of a working-class British woman. Staunton’s performance is impeccable, and the cinematography is so rich you can almost feel it. (M. Mapes, Movie Habit)