Dangerous Liaisons in a Korean dynasty 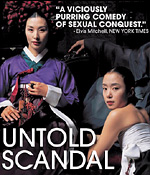 Cruelty, especially the sexually alluring kind, knows no borders. How else to explain why Choderlos de Laclos's 1781 epistolary novel Les Liaisons Dangereuses has served over the years as the basis for movies made in France, England, Czechoslovakia, Japan, and America, and now, in a spicy retelling set amid the pomp and propriety of Korea's Chosun Dynasty. Maybe the details are beginning to get a little old, but the story's essential nastiness still has the power to suck a viewer in.

The decadent widower Lord Cho-Won (Bae Yong-Jun) has seduced countless women and painted most of them in the nude but has never conquered Lady Cho (Lee Mi-Sook), his cousin and soul mate in soulless scheming. "I have room for only one person in my heart," Lord Cho-Won says early on, and while some might assume he's talking about his dead wife, Lady Cho and we know he's talking about himself.

The lady and the lord make a bet: Can he seduce the Lady Jung (Jeon Do-Yeon), a virginal noblewoman so devout she's known as "the Gate of Chastity"? If he can, Lady Cho promises to give herself to him. Lady Cho is also one of the wives of an aging noble, and she would be grateful if her cousin impregnated her husband's new concubine So-Oak (Lee Soh-Yeon), simply in the spirit of revenge.

Director E J-Yong was apparently inspired to make the film after imagining a Korean period piece set to European baroque music, and the stately tunes on the soundtrack are both an interesting link to the original book and a source of cultural disorientation. Untold Scandal unfolds with graceful, flowing assurance -- metaphorically and literally, the characters undress each other slowly -- and its placid surface is as soothing as the sharks who swim beneath it are dangerous.