A Letter to True 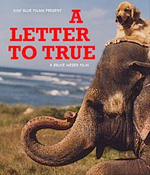 Filmmaker Bruce Weber contemplates [his subjects] with a kind of double vision. One eye is that of an impressionable boy forever on the verge of adolescence, star-struck and flooded with inchoate yearnings. The other is the discriminating eye of a commercial genius, promoting his youthful dream world with the skill of a practiced seducer.

His new film, A Letter to True, is an autobiographical scrapbook whose fragments are interwoven with a love letter, read out loud, to True, one of Mr. Weber's five beloved golden retrievers. The film is a cinematic photo spread that fixates on pets as the only beings capable of innocence, trust, loyalty and true love in a corrupt, vicious world.

Images of dogs deliriously frisking in the surf are offered against a darker backdrop of human cruelty, with special attention given to the horrors of 9/11 and the agony of Haitian detainees whose plight Mr. Weber discovered in Jonathan Demme's film The Agronomist.

Mr. Weber's narration, in a "gosh, gee-whiz'' voice that is paradoxically affectless and affected in its naïveté, supplies captions to this haunting internal dialogue between grown-up longing for a return to innocence and a child's yearning for its loss.

A Letter to True dares to be radically sentimental. Lengthy excerpts from The Courage of Lassie, a 1946 tear-jerker starring the young Ms. Taylor, are shown without ironic subtext, and embellished with Mr. Weber's story of how the adult Ms. Taylor, at his request, telephoned and conversed for 45 minutes with a friend who was dying of AIDS.

It all makes for a poignant mix, the boy inside the man, pressing his nose against the glass, longing for the journalistic authenticity of someone like Burrows while still believing in Lassie and the unconditional love of True. (S. Holden, New York Times)

A Letter to True