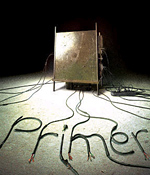 Primer is a story of two tech-savvy nerds, Abe and Aaron, who build some sort of never-fully-explained machine in their garage. They discover that the toy they’ve been testing in their box has grown mold much faster than normal. Somehow, the toy has been traveling in time! They build a bigger box — one that they can fit into — and start tinkering with space-time, and eventually, paradoxes.

There are two aspects to Primer that make it very good. The first is the fly-on-the-wall dialogue. It would be impossible to fully explain a working time machine, and writer/director Shane Carruth’s solution is to have the dialogue be over our heads — not through made-up big words like”plasma conduit” or “Jeffries tube,” but by listening in on two engineers so deep into what they’re doing that they communicate in half-sentences, gestures, and interruptions. And although the dialogue is good at obscuring the impossible, it’s also deeply engaging because we listen more carefully, like we’re eavesdropping, trying to understand what they’re really saying.

The second great idea is that time travel happens in a loop, or a Z. In order to travel in time you must first live your normal life for, say, six hours. Then you get in the box for six hours. Then you get out and start over 6 hours “ago.” There is a paradox during those six hours, but unless you stop your (first) self from getting in the box, the trip has a definite end, and the world returns to normal after those six hours are up. The loop idea is ingenious, especially when you consider the problems with overlapping and nested loops. (M. Mapes, Movie Habit)