The rise and satisfying fall of "Hollywood's new hard-on" 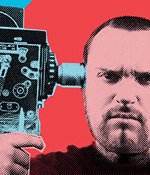 Overnight is the no-so-heartwarming tale of Troy Duffy, a blowhard who landed a movie deal and a record contract concurrently, quickly got to be way too big for his britches, took on Harvey Weinstein, and flamed out, losing all of his friends in the process.

His freshman screenplay, The Boondock Saints, miraculously becomes the talk of Hollywood and catches the eye of Miramax honcho Harvey Weinstein. Lickety-split, Troy’s got himself a movie deal. The contract includes a $300,000 salary, a $15 million budget, final casting approval, and the purchase of the bar where Troy works. Topping it off, his band, The Brood, is on the verge of signing a big record deal.

It’s just a shame all this good stuff had to happen to Troy.

Troy is an extremely unlikable, unsympathetic individual -- he describes himself as “Hollywood’s new hard on” -- but this documentary is extremely watchable. It’s a fascinating character study of one man’s bloated self-confidence and faith in his ability to treat people like crap while expecting them to worship his aggressive will power. At the same time, it is a vicarious thrill to watch the bastard go down.

The tricky part of making Overnight was steering clear of what could be perceived as strictly a “revenge piece.” After all, they needed to make a movie people would be willing to watch and even as it stands, Duffy’s ugliness flares up within the first 10 minutes of Overnight.

As for Duffy’s take on Overnight, director Mark Brian Smith is aware of only one statement he made to Variety in which he referred to the documentary as “an 82-minute smear campaign.” (M. Anderson, Movie Habit)