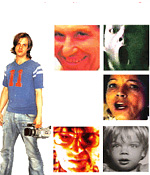 Jonathan Caouette has already gotten good buzz for having made this Sundance favorite using old photos, film from various cameras, and answering machine tapes – and spending just $218 to assemble his footage, edit it exclusively with iMovie. But the true magic of his autobiographical film Tarnation is in its intimate revelations of the sweetness amidst the damage of life.

Tarnation is Jonathan Caouette’s collected family memories, fragments of songs, ideas, and photographs, and the portrait of a young man’s discovery of film itself as a saving grace. Film is where Jonathan poured his yearnings to interpret what he was seeing and feeling, his gender identity questions, and his massive confusion about which parts of his family’s madness are his to inherit and what are owed to the forces of alcohol, tobacco, drugs, poverty, and stress.

In the horrific narrative, Jonathan grew up in Texas with his mother, Renee LeBlanc. His father abused his mother and left them when Jonathan was young. Renee was diagnosed as schizophrenic when he was small, and she was raped in front of her young son.

Jonathan spends years in foster homes where he is tied and beaten. Renee’s parents, Jonathan’s grandparents, have Renee treated in psychiatric hospitals. When Renee recounts her childhood memories late in the film, we hear eerie echoes of Jonathan’s experience, echoes that reveal just how difficult it can be to break cycles of family violence.

As Jonathan shares his coming of age and his acceptance of his sexuality he never shies away from revealing himself in the most intimate ways. “No gay person came up to me and brainwashed me,” young Jonathan declared to the camera. “If anybody’s listening, I am gay. I’ve always been gay. I don’t know if it’s been the molesting or not. I’m just lusty for everything.”

After Jonathan calls “every Steve Caouette in the world” to find his father, whom he hasn’t seen since he was two, he finally reaches him. Within the first three minutes of speaking with his son for the first time in about 20 years, Jonathan’s father asks, “Are you gay? You don’t have AIDS, do you? Cause if you have AIDS, I don’t want anything to do with you.” You can feel the kick of his words in your gut, as Jonathan may have felt in his stunned silence.

Artists should all strive to make the world better with their art. In Tarnation, Jonathan Caouette edited 19 years of his own life into a shape that affirms his love for his scratched and dented family, a gesture of hope and promise standing out from a bleak landscape. We owe Jonathan Caouette our gratitude for discovering how well, and how easily, film can capture the joyful glints of light on life’s surface as well as the terrors of the deep well of tragedy beneath. (R. Keller, Movie Habit)