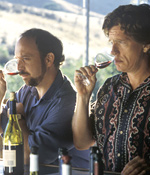 This wine-tour buddy comedy has a full body and lots of subtle overtones.

Miles (Paul Giamatti) is hardly a leading man. He’s a critic and a know-it-all. He’s not quite pudgy, but he is a sort of shapeless blob. He’s a little whiny (with an ‘h’) about his lack of success as a writer. You might think he’s a lovable loser, but then he steals money from his mother’s underwear drawer, so he’s not even that.

As his bachelor-party gift to Jack (Thomas Haden Church), Miles drives them on a tour through California wine country. Jack wants them both to get laid — himself as a last fling before marriage, and Miles as an overdue rebound from his divorce two years ago. They find two eligible women at different stops — Stephanie (Sandra Oh) is the adventurous match for Jack, and Maya (Virginia Madsen) is the oenophile whose nose and palate just might be a match for Miles’.

There are some problems with the film, but nevertheless it works. At times it works beautifully.

There is a scene of a commercial winery; the establishing shot shows a fire hose spilling a burgundy into a tanker truck. This winery makes money by selling shirts and hats and an “experience,” instead of appealing to the individual palate. It is here that Miles gets yet another rejection from a publishing house. We don’t actually know whether Miles’ book is any good, but his publicist tells him it fails because it can’t be easily marketed.

The metaphor extends to Sideways itself. Payne has made an unconventional movie where the sidekick is the hero and vice-versa. And although the marketing team has pegged the film as a wine-country buddy-comedy road movie, its real appeal is more subtle and personal than a simple marketing slogan can capture. (M. Mapes, Movie Habit)

The studio has cancelled our confirmation. Please come see Election instead.