No punches pulled in this sex researcher biography 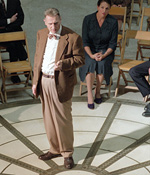 Next to love and death, is there anything as mysterious in the human condition as sex? Condon’s approach to his subject is much the same as his subject’s own approach to sex research: no punches pulled, no euphemisms and no, um, beating around the bush.

Against the odds, writer/director Condon (Gods and Monsters) has made a spry, entertaining film, especially strong in Liam Neeson’s performance as Kinsey. Considering the current election-year divisions about U.S. "moral values," Condon’s timing is extraordinary. To the right wing, Kinsey has long been considered near an Antichrist, a harbinger of America’s 50-year march towards moral doom.

Condon’s accomplishment is that he frames Kinsey the man in a compassionate drama that makes him its foremost "subject." Alfred Kinsey ("Prok" to his friends) was above all a scientist who set himself on a zealous mission to liberate sex from superstition and taboo.

Neeson’s Kinsey is a relentless, bigger-than-life figure who somewhat arrogantly sees himself as a Moses of eros. Kinsey’s interview methods were non-judgmental to a fault, freeing his subjects to be remarkably candid in their sexual histories. But Condon stops short of canonizing his subject. Kinsey’s own sexual experimentation sows discord in his marriage. And the infidelities among his researchers lead to at least one office fistfight.

While made on a relatively small budget ($10 million), Condon’s diligent production doesn’t skimp on its supporting cast. Linney, Lithgow, Peter Sarsgaard, Oliver Platt, et al., are all fine as the minor planets rotating around Neeson in his robust role, which deserves Oscar consideration. Kinsey’s compassion might be best summed up in his view that, when it comes to sex, "Everybody’s different." Maybe it’s this sort of revolutionary sentiment that the conservative establishment finds so upsetting, and not just in the staid 1950s. (T. Delapa, Boulder Weekly)