The Assassination of Richard Nixon 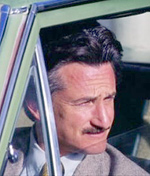 Sean Penn has reached the point where with each successive performance, he actually manages to top himself - forcing movie reviewers to claim that his latest film features his best work to date. The Assassination of Richard Nixon is no different, and casts Penn as hapless sap Sam Bicke. Though he's making an effort to conform by working as an office supplies salesman, we can tell that his anti-social tendencies are bubbling beneath the surface. The Assassination of Richard Nixon has been written and directed by Niels Mueller, who imbues the film with the vibe of a '70s movie - eschewing plot in favor of an emphasis on character development. Though the film features a supporting cast that includes Naomi Watts and Don Cheadle, this is undeniably Penn's show from start to finish. The actor delivers a performance that's rich in its complexity, turning Bicke into more than just a second-rate Travis Bickle. (D. Nusair, Reel Film Reviews)

The Assassination of Richard Nixon