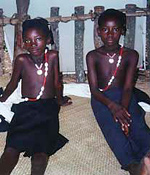 In Moolaade, six African girls refuse to undergo ritual circumcision and unwittingly cause a revolution in their village.

Terrified at the prospect of genital mutilation, the preadolescent girls break into two groups. Two escape the unnamed West African village for destinations unknown. The remaining four take refuge in the house of Colle Gallo Ardo Sy (Fatoumata Coulibaly), an independent woman with mystical powers who has already stood up to the village imams.

Without hesitation, she invokes the spell for the four girls. Tying a tassel across the entrance of her home, she forbids them to cross it. No man or woman of any authority in the village dares to step over the rope either.

Moolaade is a riot of colors that almost rivals the vivid hues of Chinese filmmaker Zhang Yimou. The bold garments, the richness of the earth, the gorgeous greens and browns of this corner of the world, all attest to the beautiful world that can only be appreciated if one has the freedom to do so.

Despite the movie's unmistakable criticism of draconian tradition, however, Sembene never lets anyone lapse into easy categories. Mercenaire -- who represents the material, Western world -- is a wonderfully dual character. He's a womanizer and a scales-tipper, hardly a figure of morality. But he represents a freedom far more appealing than the present dystopia.

As for the men who are willing to risk killing for their traditionalist beliefs, they are more alarmed that Colle would undo their society than they are pantomimically evil. They are pawns in their own belief system, cocooned in a sort of earnest blindness. And anyone who doesn't see multiple levels of timeliness in all this probably isn't concentrating. (D. Thomson, Washington Post)

Sponsored by African Literature Association and Conference on World Affairs