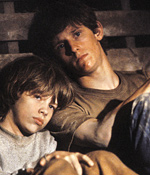 The movie that David Gordon Green's new thriller conjures up is Charles Laughton's spooky The Night of the Hunter from 1955.

Almost the same situation and setting: In a remote backwater of the rural South, two siblings are shocked when a new member arrives to a family headed by a single parent. They, and they alone, intuit his malicious intent and try to warn the parent, but to no avail. The new family member then murders the parent and maliciously hunts the children through a kind of dream landscape, as he believes they know where certain treasure is hidden. They must, as children, defend themselves.

In Laughton's eerie version, the "hunter" was played as a bogus preacher/psychopath by Robert Mitchum, in one of the screen's most repulsive yet stunning evocations of evil. In Gordon's variant, it's the young actor Josh Lucas. No, Lucas is no Mitchum -- who could be? -- but his frightening Deel Munn is a satanic-enough evocation in this singular film.

Jamie Bell? Sounds familiar. Where did Green locate such a strong young southern actor, who so perfectly looks the part as a son of a red-dirt state, tough and resilient? Well, actually Bell is English and he broke through, believe or not, in the cheerful, infectious "Billy Elliot" of 2000. How he could go from Brit ballet boy to true-grit verisimilitude seems incredible; but then I suppose it's merely acting of a special sort.

The movie builds slowly to its grinding climax, and the suspense -- the standard by which a thriller must primarily be judged -- is first-rate. (S. Hunter, Washington Post)