Kids on the cusp of losing innocence 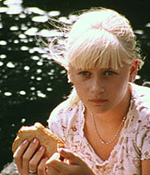 Mean Creek is poised at the magic hour of the death of innocence. The film represents in its existence and function a transitional vehicle between the end of life and rebirth. In Mean Creek, a slug crawls across cold flesh in a quiet, crepuscular moment; a snail (similar/different) is punished an instant later by a clear-eyed little girl, completing her exile from Paradise in a stroke remarkably brutal not necessarily for the act, but for the freshness of the stain on the perpetrator. The picture's title refers not to malevolence, but to a nature metaphor that works as the centre-point--the protean "mean"--between two extremes. It is that ever-tilting line that marks childhood's end: mercurial, sure, yet as substantial and rude as a brick wall.

Sam (Rory Culkin) has a crush on Millie (Carly Schroeder), or maybe Millie has a crush on Sam. By the end of Mean Creek, Sam will be in love with Millie, and he'll ask her what it'll be like when they've gone to college and become doctors and lawyers. Rocky (Trevor Morgan), Sam's older brother, is best friends with the self-destructive Marty (Scott Mechlowicz), who's dangerous and from the wrong side of the tracks. For tormenting Sam at school, bully George (Josh Peck) is lured by Sam, Rocky, and Marty on a rafting trip for the purposes of schoolboy justice swift and cruel.

Rather than being something so simple as just a bully, George is just a kid. They're all just kids, the characters and the actors who play them--this is as wondrous and transcendent (and transparent) an ensemble as any assembled this year. I boast an affection for nihilistic films but confess a real weakness for nihilistic films that reveal themselves to be fables. Mean Creek has a reason for being, offering morality and hope amidst this cess of mundane cruelty. As a Romanticist text, a sense of loss emanates from it like an odour of fog on the air--stale and fresh, familiar and alien, and pregnant with promise. It's a solid companion piece to Andrei Zvyagintsev's The Return, another commendable shrine to Terrence Malick, and another coming-of-age film that finds poetry in the struggle to evolve even while the rest world is falling down. (W. Chaw, Film Freak Central)