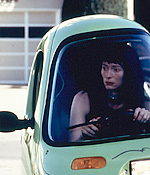 Presented in conjunction with the CU Art Museum exhibition and symposium "Techno-Sublime" curated by Lisa Tamiris Becker, Feb. 4 - March 18, 2005 (opening reception on Feb. 4, 6 - 8 pm), in the CU Art Museum. The related "Techno-Sublime" symposium is scheduled from 10 - 4 on Saturday, Feb. 5 in rm N141 also in the Sibell Wolle Fine Arts Building. More info: 303-492- 3008. Funding for Teknolust and the discussion with the filmaker to follow, is generously provided by the CU Art Museum, the Arts and Cultural Enrichment (ACE) student fees and the James and Rebecca Roser Visiting Artist Program.