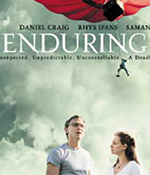 The story begins in a green field outside London where a man (Daniel Craig) is about to uncork a bottle of champagne with his girlfriend (Samantha Morton). Suddenly, a hot-air balloon floats into view, perilously close to the ground. It's carrying a boy who's evidently alone. The basket hits the ground and men begin running toward it, trying to keep the balloon from carrying the boy away again.

A gust of wind thwarts their efforts and the men are pulled into the sky, hanging from the balloon. They all let go, save for one man who holds on, only to fall from a lethal height and be smashed into the field, his legs broken, his torso sticking out of the ground.

The survivors are torn by guilt. Should they have held onto the ropes? And what about the boy?

All of this is the prologue for a movie that poses questions about the nature of love and responsibility. The Beatles said, "Love is all you need." This movie seems to be saying love is more than most can handle.

Nicely photographed and intelligently acted by Craig, Morton and the increasingly creepy Ifans, the movie sets up many possibilities, leaving us to sort things out.

Michell also drops in some fine small performances from Bill Nighy and Susan Lynch as Joe's friends. A back story deals with the widow of the man killed in the accident, mutating into a story of love and shame.

Visually captivating, Enduring Love is like a dancer who never quite finds his balance. It fits Craig's performance, an immersion into lost stability by an actor who even manages to chew angrily. Joe's a successful intellectual, but Craig knows how to make Joe's internal battles ugly and real.

Enduring Love ultimately resolves into a standard thriller about a creepy psycho. It's not entirely satisfying, but it's too intriguing to dismiss. (R. Denerstein, Rocky Mountain News)