Another pure original from Takeshi Kitano 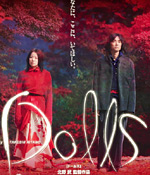 In Dolls, a man who once drove his beloved to attempt suicide now wanders the earth connected to her by a long red cord; an old yakuza boss who long ago chose gang life over love returns to the park where his sweetheart used to bring him lunch; and a reclusive, disfigured pop star is adored by an ardent fan. Love and faith, Takeshi Kitano suggests in his lyrical and typically original film, can coexist with impossibility and loss.

Released after Zatoichi but made before it, this singular work finds the Japanese Renaissance man in a romantically melancholy mood. And to tell his three stories of happy/sad devotion, he moves fluidly between flesh-and-blood performers and traditional Bunraku theater puppets. The seasons change, and the varying light only emphasizes the brilliance of the costumes, by avant-garde designer Yohji Yamamoto (who declares himself a ''Kitano-film freak''). As an exception to the norm, Kitano doesn't appear this time, confining himself merely to writing, directing, and editing. As is the norm, Dolls is nothing like what he's done before, and probably nothing like what Kitano will do next. (L. Schwarzbaum, Entertainment Weekly)