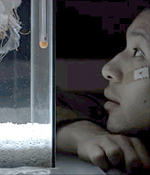 Far from your ordinary tale of a boy and his jellyfish, the latest U.S. release from prolific Japanese pulp auteur Kiyoshi Kurosawa (Cure, Pulse, Doppelgänger) is an enchantingly cryptic, ethereally photographed slice of somber surrealism that should definitely appeal to fans of David Lynch and Luis Buñuel. Bright Future begins as a fairly linear, if awkwardly cadenced chronicle of two disaffected young men who work together in a hand-towel factory.

Quiet brooder Yuji Nimura (Jo Odagiri) is entranced by the mysteriously volatile Mamoru Arita (Tadanobu Asano), and although the two don’t seem to have much in common they bond over Mamoru’s pet, a luminous and deadly red jellyfish. Mamoru’s influence over Yuji is most apparent by a series of esoteric hand commands he constantly assigns: pointing a thumb at his chest tells Yuji to "Wait," while a jutting index finger forward is "Go ahead." The context of these directions isn’t quite clear, but Mamoru’s behavior is more than just peculiar, it’s downright dangerous. After bequeathing his poisonous pet to Yuji, Mamoru is next seen talking to his protégé from behind a protective prison window, having slaughtered their boss and his family.

Further synopsizing won’t do this darkly spellbinding fantasy of urban disillusion any justice; the narrative is too purposefully impenetrable. Kurosawa is more consumed with the stark, emotional unknown that each of us experiences as youth, and by trying to film that through oversaturated HD- and DV-imagery, vague framing devices, and an amazing head-scratcher of an end tracking shot, he asks audiences to feel instead of understand. (A. Hillis, Premiere)