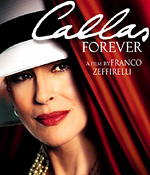 Though Franco Zeffirelli's "Callas Forever" is a work of fiction -- with Callas surrounded by made-up characters, working on a movie version of "Carmen" that never happened -- it's a fiction informed by an intimate knowledge of Callas' personality and character.

For Callas lovers, it doesn't get much better than this. The movie is rich with music and more than a few moments of painful exaltation, where the breath catches, the eyes fill and the skin tingles. You know, Callas moments. The story also gives Zeffirelli, one of the great opera directors, a chance to stage scenes from "Carmen," with Callas -- or rather Fanny Ardant as Callas -- at its center.

Yet a familiarity with Callas or opera in general is hardly required for appreciating this film. Though campy at times, "Callas Forever" is a generous offering, full of flamboyant characters and grand performances. The musical selections are deliberately chosen from the more accessible end of the Callas discography: Bizet, lots of Puccini, "Casta Diva." For many, this will be the beginning of a beautiful acquaintance with one of the supreme interpretive artists of the 20th century.

The movie takes place in 1977, several months before Callas unexpectedly died of a heart attack at 53. As in real life, Callas is living as a virtual recluse in her Paris apartment, her career over, her voice a shadow of its former glory. And then -- here's where the fiction begins -- a rescue, of sorts, arrives in the form of her old manager, Larry Kelly (Jeremy Irons).

He has a brilliant idea: Yes, Maria's voice is shot, but she's still a great actress. So why not make a film using, as the soundtrack, an opera that she recorded in her heyday? After all, singers are never recorded live on a movie soundstage anyway. What difference does it make if the playback recording is from last month or 15 years ago? It's still her.

To Zeffirelli, a Catholic, Callas was an instrument through which God poured out divine beauty. He believes this literally, and so this is the Callas he gives us: a woman blessed and cursed by a terrible gift that makes normal life meaningless, while giving her a glimpse into a transcendence that eludes her. (M. LaSalle, San Francisco Chronicle)