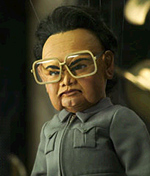 As you’d expect from the creators of South Park, Team America is shocking, funny, and socio-politically astute. It’s an edgy and sharp-witted parody — of the redneck right, the reactionary left, and especially of the all-American action movie genre.

By now you know that Team America is a puppet movie. All the characters are marionettes, except for the shark that attacks Hans Blix and the pumas that Kim Jong Il unleashes on our heroes.

As puppets, they deflate action movie cliches and earn offensive laughs by “weeping” at monuments for real dead Americans. And of course with Parker and Stone behind the strings, these puppets earn their R rating. Language, “nudity,” graphic “sex,” gore, and one horrific spasm of vomiting make this a movie parents will not want to have to explain to their kids.