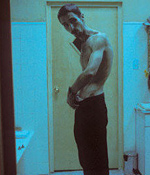 The Machinist is a study of the deepest kind of alienation, and it just might be the coldest movie you've ever seen.

Bale reportedly lost 63 pounds to play this role, and you can't stop looking at him. His appearance becomes character, shocking and skeletal as befits a man who, as one character suggests, looks as if he's about to disappear. How Trevor has arrived at this emotionally and physically impoverished destination constitutes the movie's great mystery, and it's not revealed until the end.

As the story unfolds, the shape of Trevor's life slowly becomes apparent. He's responsible for an accident at work: A co-worker loses an arm. His only meaningful relationship involves a prostitute named Stevie (Jennifer Jason Leigh). He's reading Dostoevsky's The Idiot.

Trevor also regularly visits a waitress (Aitana Sanchez-Gijon) at an all-night airport café. He takes an interest in her and her young son. Trevor and the boy wind up on one of the world's most bizarre amusement-park rides as the picture dispenses hints that reality is bending further and further out of shape.

Anderson spreads a minimal story over an industrialized landscape that creates its own kind of quiet horror. And things really begin to turn tipsy when Trevor meets an ominous character named Ivan (John Sharian). Let's just say that Ivan looks as if he's been places you wouldn't want to visit.

Bale's spare, compelling performance keeps The Machinist on track, and although Anderson (Next Stop Wonderland) hasn't produced a major work - much less one of Kafkaesque proportions - he has made an intense and eerily stylish movie. (R. Denerstein, Rocky Mountain News)