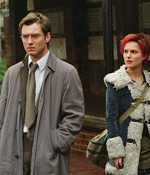 Julia Roberts, Jude Law, Clive Owen and Natalie Portman all give stunning performances in this film based on Marber's award-winning play. But Portman and Owen could be arrested for grand theft since they manage to steal the film out from under their heavyweight co-stars.

"Closer" is an acerbic story that intertwines the lives of two couples engaging in an ever-shifting emotional dance as they meet, fall in love and then fall out of love. In the process, all four manage to switch back and forth from one twosome to another. They're actually playing a dangerous game of Russian roulette, using love as a bullet.

"Closer" makes no moral judgments about its characters' behavior and is decidedly adult in its tone and subject matter. Its overriding theme is about love -- obtaining it and losing it and how fragile it can be. The film is also very human, with equal amounts of hostility and vulgarity.

But what better director than Nichols -- the man who brought us "Carnal Knowledge" and "Who's Afraid of Virginia Woolf?" -- to explore the dark recesses of the human heart?

Overall, despite the lingering feeling of being adapted from the stage, "Closer" is a haunting production that may linger in your mind long after you leave the theater. It has a lot to say about the human condition and what we're willing to go through in order to find and keep love. (P. Clinton, CNN.com)