Words of My Perfect Teacher 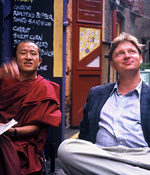 Renowned spiritual teacher Dzongsar Khyentse Norbu leads three students--one of them director Lesley Ann Patten--on a wild goose chase around the world, pressing their buttons and challenging their devotion at every turn of the screw. No sooner has he pushed them away does he rematerialize for more lessons, a habit that initially made me want to punch him hard. But as the film progresses and the three pilgrims are plunged into ever more introspective states, one begrudgingly has to admit that there might be something to his process. For neophytes who regard Buddhists as gentle, passive, and dreamy, Dzongsar's blunt and dismissive tone will come as a rude shock, but the film surrounding him serves as an excellent springboard to spiritual discussion beyond its value as a stereotype-buster. (T. Hoover, Film Freak Central)

Words of My Perfect Teacher