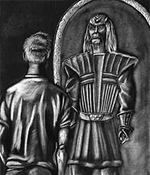 Earthlings (Ugly Bags of Mostly Water)' captures the lives, passions, and quirks of the members of the Klingon Language Institute. Klingon is, of course, the warrior's tongue developed by linguist Marc Okrand for the Star Trek television series and movie franchise. Produced within a Sci-Fi style setting, 'Earthlings' examines the interplay between culture and language, communication and emotion, and the rather delicate line between reality and fiction.

U.S., in English and Klingon, Color