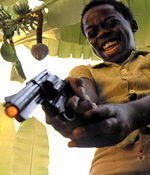 City of God is not for the faint of heart. It is horribly violent and, yes, even in this day and age, shocking. Children as young as five or six are shown on screen murdering adults, and vice versa.

City of God is told in the hip style of Trainspotting and Lock, Stock and Two Smoking Barrels. Fernando Meirelles isn't afraid to use freeze frame, or speed up time, or use caffeinated editing to tell his story. Our narrator uses the tricks of Pulp Fiction to tell his story in flashback, in flash-forward, and from many different angles. The style and techniques are catchy and attention-grabbing.

There is also substance under the style. Like in the better works of Martin Scorsese, any stylistic trick first and foremost serves the story.

City of God is based on a true story. It's told from the point of view of Rocket (Alexandre Rodriguez), who narrates from the present -- there is some comfort in knowing that someone managed to survive long enough to tell the tale, because his story tells of violence and death in the City of God, the poorest slum of Rio de Janeiro.

What makes the film great is that it treats its subject seriously and honestly. It looks closely at the details of crime and poverty without turning away in revulsion or dismissing the hoods as evil non-human beings. Because the film keeps its eyes open, you can bring anything you like to the film -- from fascination to condemnation -- and get something in return. (M. Mapes, Movie Habit)