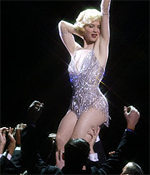 Chicago is the film version of the stage musical that rose to popularity with a revival tour in the '90s. It has a distinctive look compared to other musicals. If you've seen Cabaret or All That Jazz, you'll recognize it. Director Rob Marshall uses spotlights and shadows to suggest a giant Broadway stage. The Prohibition-era setting recalls grand days of glitz and glamor in the speakeasies of the city. Marshall uses a subdued color palette, except for the sparkling lights during the musical numbers.

Chicago tells about the fall and rise of Roxie Hart (Renee Zellweger), a young woman who dreams of being a big stage singer. She is arrested after killing her lover in a fit of anger. With the help of a brilliant, dishonest lawyer (Richard Gere), Roxie plays on the sympathies of the jury and the media to win a "not guilty." The punchline is that her notoriety earns her the fame her talent couldn't.

Although there were some very good movies in 2002, Chicago may beat them in terms of sheer fun.

There's also the naughty, racy tone to the movie. Chicago is set during Prohibition. Even at the scene of a murder, cops are joking about the suspect's infidelity. In the prison women sing "he had it comin'" and "he just can't hold his arsenic." The courtroom is merely a stage, and Gere, the lawyer, observes "in this town, murder is a form of entertainment."

The fun corruption of morals allows for some wonderful, larger-than-life characters. The ever-smirking Gere, the slick lawyer who can mold jurors and the media like putty, says he could have gotten Jesus off, had he been convicted in Chicago. (M. Mapes, Movie Habit)