Godard lives! And is working in Sarajevo. 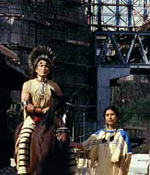 World cinema hasn't been completely reduced to sci-fi sequels and ultraviolent thrillers. Good news for film lovers was the unspooling of a terrific new work from New Wave pioneer Jean-Luc Godard. Not surprising for the French auteur, Our Music (Notre Musique) requires another three viewings to completely understand, but on its face, it is a vital and topical film that shows that, visually and thematically, Godard's still got it.

Taking as his structure Dante's The Divine Comedy, Godard breaks up his film into three parts. We begin in Hell, a 12-minute montage of vintage photographs and clips showing Man doing what he does best: waging war. Cut to a series of dissonant piano chords, it's surreal and discomforting. From there we head to Purgatory and the film's main story, which involves Godard, playing himself, arriving in Sarajevo for a conference of literary luminaries. Also in attendance is Olga (Nade Dieu), a Jewish journalist who desires an interview with a Palestinian writer. Gazing upon the Neretva River where a beloved stone bridge, destroyed in the war, is slowly being rebuilt, Olga pontificates on the possibility of a world without strife (interestingly, the bridge is actually being rebuilt using the same stones that fell into the river when it was blown up). The final section of the film is, of course, Heaven, where we find Olga walking along a beautiful path toward a river. Ironically, the river is guarded by U.S. Marines.

Like much of Godard's later work, the script is filled with philosophical musings, some quite trenchant, like when a writer claims that Communism only existed once, when the Hungarian soccer team beat the English. "The English played as individuals and lost. The Hungarians played as a team and won," he says. In what will surely be the most quoted passage of the film, Godard is asked whether he believes the digital camera can save cinema. The Master refuses to answer, gazing blankly forward.

At 73 years old, Godard can still frame and shoot beautifully. And cinematographer Julien Hirsch does him proud with cold, marble floors and lush green foliage. As for the script, it's filled with deep thoughts that may seem off-putting but eventually provide their own rewards. Godard's movies no longer make their way to America, which is a shame. Adventurous audiences would love this new film and be proud of themselves for seeing it. We're a long way from 1968, when Godard and Francois Truffaut both strolled the Croisette. But as long as Godard remains active, the art of moviemaking will retain an essential piece of its soul. (M. Keizer, Boxoffice Magazine)