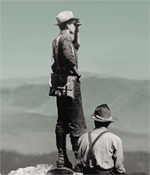 This extraordinary documentary celebrates the 100th anniversary of the US Forest Service. Visionary foresters Gifford Pinchot and Aldo Leopold shaped the debate over land stewardship for a hundred years. The journey from the "wise use" of resources to the idea of a "land ethic" has defined the evolution of the Forest Service. At the heart of this evolution are the landscapes that have inspired us all. This breathtaking documentary takes the audience on a journey as compelling as it is uniquely American.Filmmaker Dave Steinke will be there in person for an introduction and a Q&A. Sponsored by the Center of the American West.

Sponsored by Center of the American West