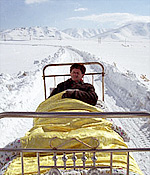 This Armenian comedy about a post-Soviet mountain village, its boondocks cemetery, its single bus, and two sexagenarians finding love in the ruins is a blessed wonder. The town survives largely by peddling off prized possessions, including marriageable daughters, and a potentially money-bearing letter from France is cause for the entire town to turn into an anxious mob. (Why is the community schnapps labeled "lemon" when "it tastes like almonds"? "That's Armenia," is the answer.) Saleem, a Paris-based Kurd, displays the visual confidence and subtle screwball rhythms of a master, exploiting offscreen space, deadpan compositions, and deft visual backbeats, as well as attaining a breathtaking fidelity to real light and landscape. From the first sequence of an old man's hospital bed rolled down a snowy road to a funeral (Romen Avinian is heroic as the crotchety protagonist), the movie makes comic eloquence look easy. (M. Atkinson, The Village Voice)