Postmen in the Mountains

Moving Chinese tale of father passing the torch to his son 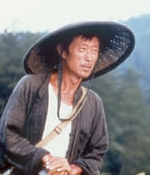 If you want to make a grown man cry at the movies, give him a story about an estranged father and son who come to love and respect each other before it’s too late. Postmen in the Mountains is such a tale, told amidst the stunning mountain scenery of China’s remote Hunan province. It’s a simple and moving story, a walk in the woods that leads to a beautiful and uplifting conclusion.

The unnamed father (Rujun Ten) is a rural postman whose job entails humping a huge backpack full of mail on a three-day walk through the mountains, stopping at all the tiny villages along the way. He’s done it several times a month for 25 years, never missing a trip. Now the postal bureaucrats have forced him into retirement because his legs have started to give out. As the film begins, the father has passed the route on to his son, and the son is ready to make his first trip.

But what about Lao’er, the father’s loyal German Shepard who has accompanied him on all his journeys? As the son leaves, Lao’er won’t go with him, choosing instead to stay at the father’s side. Dad decides to come along on one final journey to show his son the ropes and introduce him to the villagers who live along the route. Off they go, with Lao’er leading the way.

It doesn’t take long for the son to realize that his father is not the man he thought he was. All his life, the son has seen him as a stranger, a cold and distant man who was home only a few days a month and scared him when he’d return from his trips. At the first village, the father demonstrates great kindness to an old and blind granny and tells her his son will continue to read her letters to her, just as he has done all these years. When they leave town, the entire village comes out to wish the old man well and to get a look at the new postman. The son sees that out here, being a postman is important. He’s regarded as a sort of Chinese Santa Claus, and people eagerly await his arrival.

Besides being extremely moving, Postmen in the Mountains is also extremely interesting. Director Jianqi Huo has taken his camera into a corner of China that few westerners ever see, sharing not only its rustic beauty but also its abject poverty. (D. Willmott, Filmcritic.com)

Postmen in the Mountains