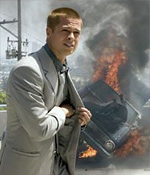 If I were interested in making lists, I might say Ocean's Twelve embodies several things I hate about movies.

But you know what? Ocean's Twelve makes up for all such potential failings with a generously entertaining spirit and a large cast that brings Rat Pack familiarity and a winking sense of savvy to roles they've played before.

Soderbergh demonstrates an unerring feel for Hollywood style, and it serves him well. Who'd have thought it would turn out this way for a guy who began his career with sex, lies and videotape and who, on occasion, has made movies that threaten to sink under the weight of their art-house heaviness?

Chemistry seems as plentiful as the movie's many twists. The actors obviously are having a great time, which partly explains why so much of their banter clicks. George Clooney inhabits the role of Danny Ocean with a special kind of ease. Brad Pitt proves as slick as a silk suit as the womanizing thief in the bunch. And as the world's most earnest thief, Matt Damon scores big time, especially when he's acting clueless.

Say what you want about Soderbergh, but he definitely understands the value of not taking certain things - like big star vehicles - too seriously. It's fitting for a movie like Ocean's Twelve, which imagines a world where nothing much matters but playing the angles, and the worst of all possible sins is letting anyone see you sweat. (R. Denerstein, Rocky Mountain News)