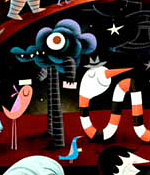 Don Hertzfeldt and Mike Judge’s touring program, THE ANIMATION SHOW, is back with all-new, fun, quirky, and strange award-winning shorts. Whether you’re in the mood to see the latest from Bill Plympton or just want to see something totally new and exhilarating, like the creepy wheelchair-racing, action-adventure submission from Australia titled WARD 13 or Hertzfeldt’s very own MEANING OF LIFE, this program is for you.