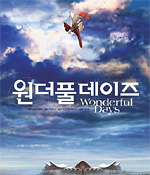 Poor South Korea. Their cuisine has never been as trendy in North America as Japan's or as dependable as China's and their cinema has only just started to get noticed outside of Asia. But don't feel too sorry for them, because there's a revolution coming and Moon-saeng Kim's debut feature Wonderful Days will be one of the films leading the charge.

Deliberately aiming to put Korean animation on the map, Wonderful Days is a tour de force blend of CGI, traditional cell animation, miniatures and live footage. Budgeted at $10 million, the film manages to distinguish itself from both Japanese and American styles and offers a uniquely Korean voice to its tale of ecological apocalypse, tragic love and ultimate redemption.

We start in 2142 A.D. after an environmental crisis has caused the division of society in two distinct classes: the privileged living in the hermetic self-growing city of ECOBAN which sustains itself by feeding off the pollution that has enveloped the rest of the world, and the Marrians who work outside, maintaining the DELOS system which converts the pollution to fuel. Jay, a beautiful ECOBAN agent is startled to learn that her first love and childhood friend Shua is not dead but actually a Marrian rebel intent on collapsing the DELOS system. But what she doesn't know is that DELOS is running out of fuel.

The grandeur of the themes, the focus on characters, and the emotional impact of the action really set this film apart. It may seem operatic to some viewers but it should be noted that this is entirely deliberate. Kim wanted to create something grand and sweeping and luckily his visuals live up to the task. Forgoing much of the usual techno-babble that encumbers it's Japanese brothers, Wonderful Days instead focuses on long David Lean-esque pans of the landscape to reinforce it's environmental message.