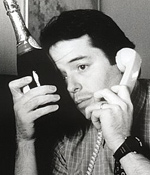 Third time's a charm, at least for Alexander Payne, who won his first screenwriting Oscar for Sideways. He was nominated, but didn't win, for both About Schmidt and the high school black comedy Election.

Election is a very well written, directed, and acted comedy. It's full of perceptive details that are funny because of how common they are. Mr. McCalister (Matthew Broderick, perfect in the role), a civics teacher, has mediocre hair and cheap clothes that only a teacher would wear. He drives a Ford Escort, has an affair with a less-than-beautiful woman, and adorns their secret motel room ("Welcome seed dealers") with romantic gifts from Walgreens.

Tracy (Reese Witherspoon, also outstanding) is the annoyingly perfect high school girl. She is pert and preppy, gets straight As, and is a shoo-in for the student body presidency. She adopts Clintonesque strategies in her stump speech, identifying individuals in the audience who, though not as famous as she, have still made a difference at their school.

The plot starts moving when "Mr. M" encourages an injured football star to run for president. Tracy had been running unopposed, but now Mr. M has ruined it. Ultimately, Mr. M and Tracy end up in subtle war. Payne's Election is not as outlandishly quirky as Wes Anderson's films are. Instead, it strives to find the comic in depressingly real, everyday situations. Election is a great comic tragedy, writ small. (M. Mapes, Movie Habit)