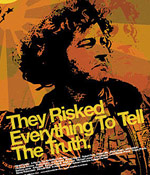 This little-seen 1972 film takes us to The Winter Soldier Investigation, an event that attempted to expose atrocities committed by U.S. soldiers in Vietnam.

The testimony came from the more than 100 vets who traveled to Detroit in 1971 to testify in the wake of the My Lai Massacre. Many spoke of crimes that they had committed or witnessed: Their stories seemed a painful venting of guilt and horror, and watching the movie is nothing short of chilling.

By the time they reached Detroit, most of the veterans had undergone conversion experiences. They began as committed soldiers and became anti-war protesters. Many said they believed they had been trained to dehumanize the Vietnamese people.
According to testimony, soldiers made little distinction been Viet Cong soldiers and civilians. Any Vietnamese who was shot automatically became a VC enemy as a way of boosting body counts.

I can't think of a recent film that's been more difficult to watch. The accounts of atrocities committed by U.S. troops (if this film is to be believed) went beyond horrific - from disemboweling to contests in which prisoners were thrown out of helicopters to see who could toss the bodies farthest. Women and children were not immune, and the sense one gets from listening to these soldiers and Marines is that Vietnam was a kind of violent free-for-all in which the only governing forces were fear, hatred and fury over dead comrades. (R. Denerstein, Rocky Mountain News)