To Sleep with Anger

With director Charles Burnett in person 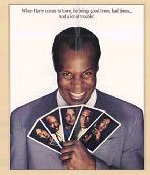 At some point in every child's life a stranger comes to the door and stands there, mysterious and threatening, until a light is turned on or a name is called out, and the stranger is revealed as a friend. That ominous moment of mystery—the dark outline, the knocking at the door from the great terrifying world—connects with an archetypal fear we all grow up sharing.

Charles Burnett's TO SLEEP WITH ANGER is a subtle kind of horror movie in which the unwelcome visitor is not a slasher or a cartoon character, but a soft-spoken relative from down South, getting on a bit in years, well-dressed, seemingly courteous. The tension in the movie is created as he stays and stays, until he is clearly unwelcome and yet no one can figure out a way to get rid of him. And the horror element comes as it begins to dawn on us, and the characters in the movie, that this man is some sort of emissary of evil. Perhaps not Satan precisely, but familiar with the neighborhood.

Harry is played in the movie by Danny Glover, who usually plays the most pleasant of men. Here his very pleasantness makes him more sinister. His good manners turn oily, somehow, and the others begin to clear a space around him, physically and in conversation. Glover is an actor of considerable presence, and here he lets us know his character is from hell, and hardly has to raise his voice. (R. Ebert)

To Sleep with Anger