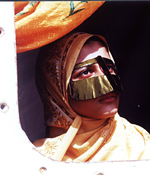 Deep in the Persian Gulf lies a slowly sinking oil tanker, residence to hundreds of poor, destitute and abandoned people. The ship is their home, school, mosque and livelihood. For some, it is all they've ever known, born and raised on the rusting hulk. Every man, woman, child and goat is under the command of the all-controlling Captain Nemat, who arranges marriages, organises work, signs the paperwork and deals out punishment.

Iron Island is the second feature by Iranian director Mohammad Rasoulof. The story of the boat and its inhabitants is one of extreme hardship and complicit exploitation. Unlike the plodding and bleak struggles often portrayed in Iranian cinema, Iron Island is a stunning visual experience; golden sunsets and the azure seas contrast with the decrepit and decaying remains of the abandoned tanker and its impoverished inhabitants, while slow motion photography is used to memorable effect in several beautiful scenes.

Does Nemat represent a benevolent dictator, only helping the people because they exist as his slave labour force? Or is he truly concerned for their well being? Judgement is held off and even the end holds no concrete answers, leaving the viewer to make their own interpretation.

Between the future of the squatters' community on board, a story of arranged marriage and forbidden romance and a small child catching fish in the hold, the film makes for beautiful and compelling viewing. The world Rasoulof has created is endlessly fascinating. (iofilm)