The Untold Story of Emmett Louis Till 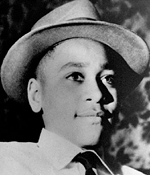 Images still speak louder than words. The brutal murder of Emmett Till became a major catalyst of the civil rights movement, thanks to a horrific photo of Till's mutilated corpse in Jet magazine. Till's indomitable mother insisted on an open casket so that all the world could see the unspeakable violence visited upon a 14-year-old black boy for whistling at a white woman in Mississippi.

Beauchamp expertly excerpts long stretches from the extensive television coverage of the 1955 events, juxtaposing them with present-day interviews with the people who lived though these traumatic happenings.

But his interviewees -- articulate and thoughtful though they may be (particularly Mamie Till-Mobley, Emmet's mother and the heroine of the piece) -- cannot hold a candle to the black-and-white villains in the historic film clips that seem to have been sent down straight from Central Casting: the fat redneck sheriff railing against "the niggers from the North," and the smirking, swaggering killers openly accepting the congratulations of the townfolk.

Equally impressive is the quiet valor of Till's great uncle, standing up in a Southern court to dramatically point to the abductors of his nephew, and the pensive strength of Medgar Evers finding and bravely shepherding other witnesses to the trial.

Till's murderers, who later proudly confessed to the killing in the pages of Look magazine, were acquitted in spite of overwhelming evidence against them.

The recent discovery by Beauchamp that several possible accomplices (including the woman whistled at) are still alive and prosecutable is extremely dramatic and mind-blowing. Yet nothing can compare to the bygone drama that unfolded in Money, Miss., in August 1955, when a kid from Chicago whistled in the wind. (R. Scheib, Variety)

The Untold Story of Emmett Louis Till