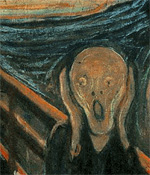 Just as paintings depend on love and occasional restoration to keep them alive, so movies about painters need loving care as well. Peter Watkins' Edvard Munch is one of the best. Made for Norwegian TV in the '70s, released to great critical success in America in 1976 and largely unseen and neglected since, it's a film whose time deserves to come again -- especially in the meticulously restored version, supervised by Watkins himself.

The subject is fascinating: Munch (1863-1944), the 19th Century Norwegian expressionist painter whose The Scream imprints one of the world's indelible images of anxiety and inner terror. But the treatment is remarkable as well. Watkins, an early master of the "mockumentary" (1967's The War Game) pioneered techniques that were a stimulating fusion of non-fiction style and dramatic subjects.

Here he uses a documentary style, rich narration and improvised scenes with a largely amateur cast (headed by delicately morose Geir Westby as Munch). The near-cinema-verite feel that results brings his subject alive.

Like very few movies on painters -- Andrei Roublev, Lust for Life and a handful of others -- Edvard Munch brings us close to both the creator and his creations. Watkins' methods steep us in Munch's life and feelings, even in the act of painting itself.

The film, despite its '70s acclaim, was so disliked by its Norwegian TV producers that it was locked away for decades; now Watkins and distributor/admirer Oliver Groom have restored it and brought it back. (M. Wilmington, Chicago Tribune)