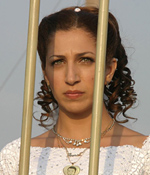 Ideology trumps all in this immensely memorable collaboration between an Israeli director, a Palestinian screenwriter and a cast of mixed origins. Though Mona (Clara Khoury) would love to be an ordinary bride, geography, politics and culture have conspired to make her wedding the saddest of her life. (Elizabeth Weitzman, Daily News)