Where the Truth Lies 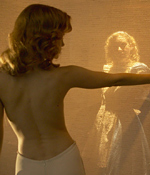 Atom Egoyan has delivered a big, slick and sexy mystery in "Where the Truth Lies," turning the Rupert Holmes novel into a sumptuous tale of show business hype and duplicity.

Rich in backstage atmosphere and the glamour of big-time hotels and nightclubs, the movie delves with considerable wit into the ugly side of the entertainment industry.

In the late '50s, Lanny Morris (Kevin Bacon) and Vince Collins (Colin Firth) are the biggest comedy duo in America. The last thing they need is the naked body of a beautiful blonde in the bathtub of their New Jersey hotel room.

In fact, the last thing the comedians do as partners is to deny they had anything to do with the dead woman, and they promptly break up their long-standing and hugely successful act.

Fifteen years later, a young writer named Karen O'Connor (Alison Lohman) wins a fat contract from a publisher to write a book about Vince Collins, and it is through her eyes that the secret behind their split is slowly revealed.

Using flashbacks from different points of view, Egoyan traces the lies and deception that have kept the sordid events that followed a Miami telethon from a still-adoring public.

Egoyan has enormous fun peeling the wrappers of showbiz lore so that we see the hoodlums, the drug taking, kinky sex and unstoppable violence. Soon O'Connor is wrapped up in it as much as the superstars who might or might not have committed murder.

The film obeys the sometimes strained logic of mystery novels so that there's more than the occasional need to suspend disbelief, but Egoyan's script moves slickly along to a satisfying conclusion. (R. Bennett, Hollywood Reporter)

Where the Truth Lies