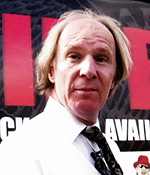 "New York Doll" is a documentary with the charm of the unexpected. It's a rock 'n' roll fairy tale involving fame and obscurity, feuds and friendship, glam rock and the Church of Jesus Christ of Latter-day Saints. If that sounds like an unlikely combination, the reality is twice as improbable.

Front and center in this genial tale is 55-year-old Arthur Kane, introduced wryly complaining about the Los Angeles bus system that takes him from his midcity home to his job servicing copy machines at the Westside's LDS Family History Center. "I've been demoted," he says at one point, "from rock star to schlep on the bus."

Thirty years earlier, this man was Killer Kane, bassist in the influential cross-dressing glam rock band the New York Dolls, characterized by British singer Morrissey as "one of the most raucous, notorious bands in rock 'n' roll history."

The combination of alcoholism (his own) and heroin addiction (two of his bandmates), feuds and bad decisions led to the breakup of the Dolls and Kane's decades-long estrangement from rock.

In the interim, he'd converted to Mormonism after answering an ad in TV Guide, a development someone says is "like Donny Osmond becoming a New York Doll."

When Dolls fan Morrissey was named curator of London's 2004 Meltdown Festival, he asked the surviving Dolls (Kane, Sylvain Sylvain and frontman David Johansen) to put aside their past differences and reunite. To each other's amazement, they all agreed.

"New York Doll" was fortunate in its interview subjects. Aside from the thoughtful, articulate Morrissey, the film talks to celebrated Dollophiles including the Pretenders' Chrissie Hynde, the Clash's Mick Jones, Iggy Pop and Bob Geldof. And then there is Kane himself, who has a disarming quality all his own.

Though it is small in scale and lasts only 78 minutes, "New York Doll," like any documentary, goes places we expect it to and places we do not. As journeys go, this is one to treasure. (K. Turan, L.A. Times)