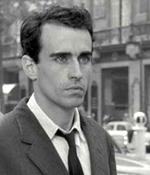 Michel, a solitary young man (Martin LaSalle), turns to picking pockets for a living. He's arrested almost right away, but released for lack of evidence; the experience only encourages him and soon he's devoting his life to studying the art, both in books and from other, more successful thieves. Robert Bresson's unadorned style, his intense focus on the loneliness of his character and how that feeds his sense of injustice about the world, involves us totally with Michel's limited world. This film was a great influence on American filmmakers such as Paul Schrader, whose loners are variations of Michel. (T. Weiner, Off-Hollywood Film Guide)