Be Here to Love Me 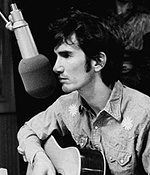 "I'd like to write songs that are so good nobody understands them, including me," the Texan singer-songwriter Townes Van Zandt remarks half-seriously in Margaret Brown's tender, impressionistic film biography, "Be Here to Love Me." The words evoke the shadowy images in many of the songs written by Van Zandt, a country-folk troubadour who died of a heart attack on Jan. 1, 1997, while recovering from a broken hip; he was 52.

Van Zandt's most famous song, "Pancho and Lefty," which Willie Nelson and Merle Haggard made into a No. 1 country hit in 1983, is typical: a visionary story of a drifter and an outlaw roaming through a mythic Old West landscape.

Stylistically, Van Zandt's songs dwell in the limbo between folk and country. The singer and songwriter he most closely resembled is Lyle Lovett, who appears briefly late in the film.

Director Margaret Brown has gathered an impressive array of clips from television interviews and live performances and arranged them into a rough chronology. Van Zandt's close friend Guy Clark, Kris Kristofferson (musing about the sacrificial life of the artist), Jerry Jeff Walker, Steve Earle and Nelson are among those who pay him tribute.

His story, told in bits and pieces, is a mostly sad one of an unstable, unlucky man, the son of a wealthy Fort Worth oil executive, fending off demons. He was periodically addicted to alcohol and drugs. As a young man, his sister recalls, Van Zandt deliberately fell backward out of a fourth-story window "just to see what it felt like." That incident caused him to be put in a mental hospital, where he was given electric shock therapy that erased his childhood memories. He developed an obsession with the blues guitarist Lightnin' Hopkins, who became a major influence on his playing.

Near the end of his life, one of his admirers, Steve Shelley of Sonic Youth, collaborated with him on a recording that was never completed.

Here, as in so many other documentaries about troubled musicians, the word genius is casually tossed around. But does every unstable, self-destructive artist defiantly living on the edge qualify for that description? In Van Zandt's case, maybe yes. (S. Holden, NY Times)

Be Here to Love Me