Murmur of the Heart 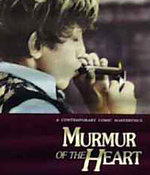 Louis Malle looks into his own backyard—the film is set in Dijon in 1954 at the time of Dien Bien Phu, and it's about the sex education of the 14-year-old Laurent (Benoit Ferreux), the youngest, brightest son of a successful gynecologist (Daniel Gélin) and his Italian-born wife (Léa Massari). This is perhaps the first time on film that anyone has shown us the bourgeoisie enjoying its privileges. Massari is superb as Clara, the carelessly sensual mother; Clara is shamelessly loose and free, and she's loved by her sons because of her indifference to the bourgeois forms, which they nevertheless accept—on the surface, that is. The story moves toward its supremely logical yet imaginative conclusion so stealthily that the kicker joke is perfect. With Michel Lonsdale as Father Henri. The script is by Malle. (Pauline Kael)

Murmur of the Heart